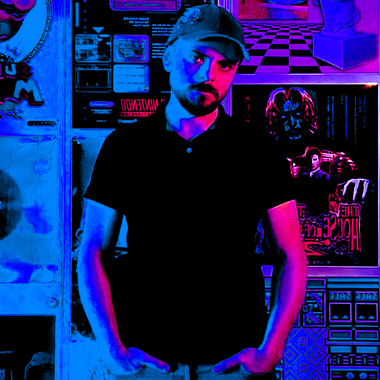 Jon Graham
By proceeding, you confirm that you are
at least 18 years of age.
Yes, I choose to proceed
Cancel
Cancel

I hope you've had happy holidays.

I put out the last batch of Arby 'n' the Chief season five commentaries earlier this month but I don't have a new primary, public upload for you yet.

I've been a bit lazy.

I wanted a break after the Arby finale, and to use the holiday weeks to relax, play games and watch movies, get some inspiration for new projects and think.

However, I've spent time writing throughout, as I do every day in some capacity because it's fun.

I'm almost done an outline for a Mediabyss episode likely consisting of multiple parts ("tapes"), like the Halo TV series episode, covering the production of Arby from the first season to the eighth.

I started recording the episode earlier based off a rougher outline draft in hopes of uploading it this month but the talk was a mess and full of stalling, the outline still needs work for a better flow through the stupid way my brain works.

I keep thinking of new talking points too as Arby's production is a long window of time, and I want to throw more jokes in.

I've conceived and written outlines and dialogue for a number of new shorts, both live action and Arby 'n' the Chief.

One of the latter is a mockery of the idea of rebooting Arby 'n' the Chief now that season eight's over, featuring unique music and a Skyler Loveheart reappearance, but the script needs more work.

Last night, after at least sixteen re-writes over at least half a year, I finished what I currently consider a finalized outline of scenes with point-form details for an entire season of a Hard Justice soft reboot.

I'm now filling the scenes out with specific shots and dialogue.

My next upload may be my Mediabyss episode on Arby or a concept sequence for Hard Justice, I'm not sure yet.

I'm currently jumping between development of these two main projects, among others, as I often do to fight procrastination and tunnel vision and have fun with what I'm writing, which I believe improves the work across the board.

I'm going to let the Patreon charges go through for this month.

I hope that's alright with you.

I've heard from numerous subscribers and people close to me that I've paused my income too often in the past.

Sometimes, even if I work the whole month, it takes longer than that to pull a video of my type together due to its scale, or that of the overall series or season plan, other work, or other reasons.

In any case, I've felt bad about it, but I want to be a bit fairer to myself going forward.

I'll always aim to offer both a primary upload and bonus material each month, but if I have neither at a month's end, or two months go by without a primary upload from me, I'll pause my Patreon income.

It's not clear to me how to or if I can pause income via SubscribeStar or YouTube memberships, so if you're supporting me financially, be mindful of the method you use.

Give me another week or two and I should have something cool to show you.

The first batch of commentaries for Arby's sixth season will come next month.

Thank you all so much as always for your generous contributions, and feel free to cancel at any time.

I wish you all a happy new year!

I can't get the Arby 'n' the Chief season eight finale to you quite yet. I need another couple of weeks. Sorry. I promise it's coming. The episode's about 98% of the way there altogether; slates, recap, credits, gameplay, live action, visual effects, edited with all sound mixed. The finish line is well within sight. It's a bit hard to believe, considering the length of this journey since 2008, and the start of season eight too many years ago.

Throughout this month I agreed to a number of recordings for other podcasts when I probably should've held off or accepted a lesser number, and later I was assigned a bunch of work from another editing job that was unexpectedly and untypically complicated and urgent in the form of promotional material that needed numerous revisions.

I still need to shoot and re-shoot a couple of live action scenes, one off-site, another that I'm unable to 'til this week's end, and then I need a bit of time to cut and mix those scenes. Some additional dialogue needs to be recorded and mixed based on ideas and rewrites conjured in editing. A bit more sound and graphic design and visual effects polish is needed on a few shots. I don't like taking shortcuts in production, and I especially don't want to now that we're at the end.

Please bear with me for a little longer and I will have this season, an embarrassing six years in the making -- and the mainline story of the series that started about fourteen years ago -- in the can, with a finale that goes hard "A-F", as the kids say.

I'm not kidding with the last part. Not only is the finale explosive, but goes much harder in regard to emotion and subject matter than I believe most viewers are prepared for; moreso, I think, than anything else I've made. Parts of it are extremely dark and heavy, but it's not all doom and gloom. There's also lots of jokes, crazy stuff, and what I believe to be a fiercely positive underlying message.

I'm nervous about releasing it for a number of reasons, including high expectations following a long time coming, but I'm quite happy with how it's turning out. I really hope you enjoy it.

For my Patreon and SubscribeStar subscribers, I at least don't come empty-handed for this month. For subscribers at the Gosu tier I have four videos for you: a new batch of commentaries on more episodes of season five of Arby 'n' the Chief, totaling about an hour and a half of material. And, for subscribers at any tier, a few-minutes sneak peek of the finale in the form of its opening scene, should you like to spoil a tiny, introductory bit of what's to come for yourself. I feel as though most of you reading this would rather wait until the whole finale's out before watching any of it, which I understand.

In the case of this finale, despite the listed perks of a subscription to my Patreon or SubscribeStar, I don't want to put out an early release exclusively for subscribers. Due to the landmark nature of this upload, I'd rather everyone interested in watching it were to see it premiered simultaneously. I hope that's alright with my patrons.

Thank you all so much as always for your viewership, patience, not giving me a hard time for the development length, constructive and encouraging comments, e-mails, memberships, merchandise purchases, and other financial contributions. You've kindly given me peace of mind in these wild times and I feel incredibly fortunate. This content would not exist without you.

In a separate, recent, and public Patreon post of mine you'll find a list of producers compiled from my Patreon and Subscribestar subscribers and YouTube members at the Hax0r tier currently set to appear in the end credits of the finale. Between now and my last time exporting the episode I'd like all my Hax0r patrons to please look it over and verify that you're listed and that your listing is correct. If you should be on the list and you're not, or your listing needs correcting or changing, please message me directly via Patreon or e-mail ([email protected]) with the name or alias of yours that should be there and I will fix it before the final export and YouTube premiere.

For those who aren't currently subscribed to me via Patreon, SubscribeStar or YouTube's membership program at the Hax0r tier and wish to be credited as a producer in the finale but have been holding off until its release, now is the time to subscribe at said tier. I will add new, desired names and aliases to the credits right up until the final export. By default I will use the name or alias of the username of the subscribing account at the appropriate tier.

Thank you all again, and I hope you have a spoopy Halloween. Not long now.