Surrellusion - Circus Octopia
In these early stages i want to regularly upload the base drawings for each panels, but only those which doesn't spoil the story. My goal is to produce a hardcover visual novel with original art and story. I use subscribestar mainly to keep up the self-motivation.
Comic
VisualNovel
Art
Story
Fantasy
Steampunk
Subscribe
Send Message

Join for free to receive email notifications about new posts submitted. I highly appreciate every follower who is interested in this project. Updates regularly and will give you a complete overview about the state of the project.

This tier will give you finished artwork, possibility to tweak details on occasion and deeper insight into my creation process. 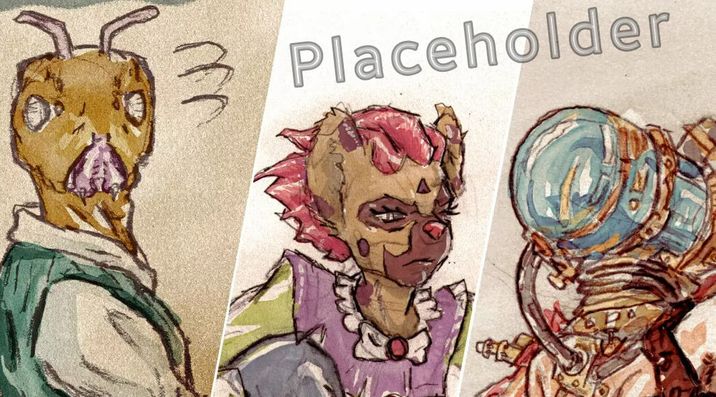 Surrellusion - Circus Octopia
Public post
I am at page 40 in the first phase, the concept sketches of the pages. Dialogue will also be done here.
Phase 2 will be creating the final drawings.
Phase 3 will be scanning and adding color digitally.
Phase 4 will be final adjustments/proof reading.

I made the first version of the cover. I already have ideas to improve it, but for now this is it...

This is Madame Gaudina, Ringmaster of Circus Octopia, inviting her audience into the show. Still ...

Goal:
First issue with several chapters (long enough to be a hardcover visual novel).
Themes: Friendship, dealing with hardships and trauma, finding purpose with or without others included.
Setting: industrial, semi-apocalyptic steampunk world in which persons need to work hard/stick together to survive or reach their goals.
Additionally, people have different animalistic traits (making them anthropomorphs in different stages (1-4) of transfomation from human form).
Tone: Grimdark and horror, sprinkled with humor and emotional/psychological drama. Aiming for pg16-eske mixture of significant but reasonable brutality and wicked and suggestive moments without it being the driving factor, only applied when it makes sense to the story and the characters. No forced/explicit erotic material, it will be wicked and boundary-breaking enough without it.

Spoiler-free summary (back cover) text:
Young Lev always dreamed about being special, like every child born in this harsh world full of sharks and rhinos. But like many he needs to work long bone-screwing shifts for just barely enough pay to buy food or to lend out beloved books to feed his imagination. One day he recognised new posters on the pipes around him: something special, weird and indisputable compelling is coming to town...

Done:
Concept
Main story plot and some intertwined character arcs.
Most of the character designs finished.
World background/setting and main lore.
Decision on and fleshing out art style and colorisation.
About 10% of panel skribbles.

When i am back at my work station i start producing more visual content and work out some details of the plot.
Also next on the to-do list: logo and front cover art.
Comments (0) loading...
Like(0)
Dislike(0)

Surrellusion - Circus Octopia
Public post
First test posting. I am new to this, bear with me.
Also i am on vacation and sick, so here is a blurry phonecam pic of one of the main character, Lev.
ComicCircusAnthroVisualNovel
Comments (0) loading...
Like(1)
Dislike(0)
See something you like? Subscribe to see even more!
Subscribe Now
The subscription gives you: