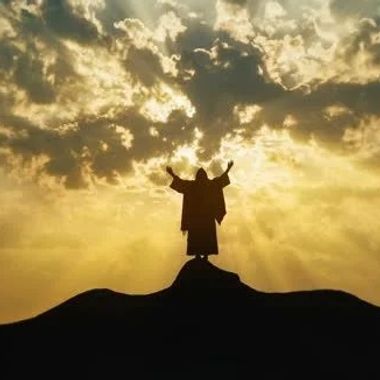 (3) Verily I say unto you, Except ye be converted, and become as little children, ye shall not enter into the kingdom of heaven.
(4) Whosoever therefore shall humble himself as this little child, the same is greatest in the kingdom of heaven.
(5) And who so shall receive one such little child in my name recieveth me.
(6) But who so shall offend one of these little ones which believe in me, it were better for him that a millstone were hanged about his neck, and that he were drowned in the depth of the sea.
(7) Woe unto the world because of offences! for it must needs be that offences come; but woe to that man by whom the offence cometh!
(8) Wherefore if thy hand or thy foot offend thee, cut them off, and cast them from thee: it is better for thee to enter into life halt or maimed, rather than having two hands or two feet to be cast into everlasting fire.
(9) And if thine eye offend thee, pluck it out, and cast it from thee: it is better for thee to enter into life with one eye, rather than having two eyes to be cast into hell fire.
(10) Take heed that ye despise not one of these little ones; for Isay unto you, That in heaven their angels do always behold the face of my Father which is in heaven.
(11) For the Son of man is come to save that which was lost.
(12) How think ye? if a man have an hundred sheep,and one of them be gone astray, doth he not leave the ninety and nine, and goeth into the mountains, and seeketh that which is gone astray?
(13) And if so be that he find it, verily I say unto you, he rejoiceth more of that sheep, than of the ninety and nine which went not astray.
(14) Even so it is not the will of your Father which is in heaven, that one of these little ones should perish.
(15) Moreover if thy brother shall trespass against thee, go and tell him his fault between thee and him alone: if he shall hear thee, thou hast gained thy brother.
(16) But if he will not hear thee, then take with thee one or two more, that in the mouth of two of three witnesses every word may be established.
(17) And if he shall neglect to hear the church, let him be unto thee as an heathen man and a publican.
(18) Verily I say unto you, Whatsoever ye shall bind on earth shall be bound in heaven: and whatsoever ye shall loose on earth shall be loosed in heaven.
(19) Again I say unto you, That if two of you shall agree on earth as touching any thing that they shall ask, it shall be done for them of my Father which is in heaven.
(20) For where two or three are gathered together in my name, there am I in the midst of them.
(22) I say not unto thee, Until seven times: but, Until seventy times seven.
(23) Therefore is the kingdom of heaven likened unto a certain king, which would take account of his servants.
(24) And when he had begun to reckon, one was brought unto him, which owed him ten thousand talents.
(25) But for as much as he had not to pay, his lord commanded him to be sold, and his wife and children, and all that he had, and payment to be made.
(26) The servant therefore fell down, and worshipped him, saying, Lord, have patience with me, and I will pay thee all.
(27) Then the lord of that servant was moved with compassion, and loosed him, and forgave him the debt.
(28) But the same servant went out, and found one of his fellow servants, which owed him an hundred pence: and he laid hands on him, and took him by the throat, saying, Pay me that thou owest.
(29) And his fellow servant fell down at his feet, and be sought him, saying, Have patience with me, and I will pay thee all.
(30) And he would not: but went and cast him into prison, till he should pay the debt.
(31) So when his fellow servants saw what was done, they were very sorry, and came and told unto their lord all that was done.
(32) Then his lord, after that he had called him, said unto him, O thou wicked servant, I forgave thee all that debt, because thou desiredst me:
(33) Shouldest not thou also have had compassion on thy fellow servant, even as I had on thee?
(34) And his lord was wroth, and delivered him to the tormentors, till he should pay all that was due unto him.
(35) So likewise shall my heavenly Father do also unto you, if ye from your hearts forgive not every one his brother their trespasses.

Translation:
I am telling all of you that you must let go of your traditional ways of thinking and learn my belief system.

~ As a child, your brain is a sponge and it is much easier to teach a child than it is to teach an adult. We must all be as a child. Willing to learn what the Christ teaches us.

Shame on those who would persecute any of these followers who have become like children.
~ The Christ is telling people to let go of all their temptations. When he speaks of plucking out the eye, he is talking about looking at women in temptations to do adultery. The fire is lust and passion.

I am the son of man. What do YOU think of me?
~ The Christ explains in his 1 sheep and 99 sheep verse; that all people in his caravan is important. Not one member is more important than the other.

Go preach my words to the people in one on one conversation. But if they do not listen to you, bring more people in attempts to teach them my lessons. ~ This may confirm why missionaries come to you door in groups.

~ At this moment Jesus is getting angry, maybe frustrated. He uses the term "I say on unto you!" This is the same as saying, 'I am telling you!" He is also explaining that Earth is a training ground for Heaven. Jesus uses a certain king as an example, but did not want to mention that king's name. I think he is talking about David. He is talking about by a hypocrite. Do not speak against a person treating someone wrong, and then you too go do something wrong to another person. He is pretty much saying: "I tend to forgive you for your faults. So YOU should also forgive other's for their faults."

Keepers of the New Age World

In 2012 a new world was formed. With this new world came a new state of consciousness.

When the people of Earth woke up, on the day of December 22nd 2012, they found themselves living in a realm in which their past lives, had taken over. Most humans were unable to cope with this new reality. But there were special people, children, who knew of this day; one's who were already in tuned, with whom they once were, thousands of years before...

In the year 2012 "Agenda 21" was induced: a bill that would allow governments, of 178 countries to move families to reservations and concentration camps. But not all families will be moved...

Knowing the special abilities of these children; they along with their families were allowed to live in remote forests protected by governments. Families living on reservations were allowed to continue their normal ways of living: television, radio stations, cell phones, cars etc...

Normal right? 2012 will only be the beginning of their deepest fears.

There is not one person who is both racist and happy. Most people are not even racist at all. Maybe you had one bad situation with a person, and decided those types of people are ALL bad. For $4 a month you will receive all the tools to help you get over your possible racism. Additional options are phone chats, video chats or email chats, if you need them (additional $40 a month, see below tier). I have an open mind, so lets talk!

Why is the world the way it is?

I understand it seems like this world is slipping away. But it does not have to be that way. You can make this world a better place simply by understanding it. There are many beautiful magics here! And you can tap into those beauties!

Receive uplifting messages regularly, to keep you going in your daily life, and will help you stay on course on your path to Heaven. Lessons include homework assignments.

Ever wondered what the red print within the Bible meant? The Christ's life on earth was a political campaign funded by Mary Magdalene's family, and much much more!

All of us want to be close to the Creator. But if we are not taught correctly, we can be led even further away! For less than the cost of weekly coffee and fast food, you can learn the secrets of the Creator, bringing you closer to divine consciousness. Lessons include homework assignments.

These are the more advanced spiritual lessons. We recommend experiencing our beginner lessons before venturing into this tier. It is far more advanced and may be difficult to understand if not properly educated.

Not Fearing Death Allows You To Live More Courageously

How to Prepare Your Afterlife

What to Expect In Heaven