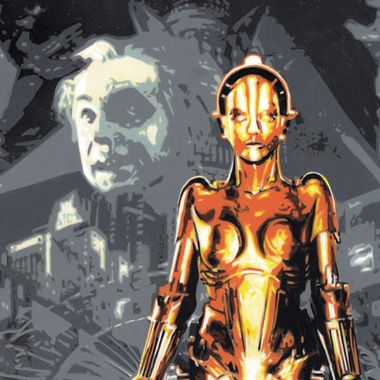 This is the latest in the series of illustrations for Towers of Metropolis Volume 2, soon to be released by Airship 27 Productions.  This story anthology is based on the world created for the 1927 Fritz Lang Science Fiction Epic, Metropolis.  I created this piece using a mixture of traditional and digital tools.  The line art was created on Bristol Board at a size of 10" x 15", in ink over a blue-line rough, and then scanned, color corrected, and toned using custom Benday patterns (or zip-a-tone if you prefer) in Photoshop.

There's one more story to illustrate before this volume goes on sale.  So, once the publisher sends me the final manuscript, and I can work the illustrations into what has been a very busy comic book schedule, then the book will be released.  The stories are the real star of this book.  If you like the illustrations, thank the writers who have gone above and beyond in recreating the world of Fritz Lang's Metropolis (and have inspired me to new heights in my illustrations).
Comments (0) loading...
Like(0)
Dislike(0)

James E. Lyle Sequential Illustrator
Public post
Once again, I haven't posted anything in weeks.  I've been so busy with a continuing comic book project (and other things) that posting has become a minor priority.  My apologies to anyone who's been left hanging.
Nevertheless--here is my latest illustration for "The Towers of Metropolis Volume 2" soon to be released by Airship 27 Productions.  ("Soon" being defined as once I get the final group of illustrations finished and they can put it on the schedule.  Which may still be a few months.)

Having to put these illustrations into holes in my schedule has not diminished the excitement that accompanies the completion of each.  Everyone involved is very excited, and the final book should be a real treasure.

Once again, these new pulp style stories are based on the seminal 1927 silent film "Metropolis", directed by Fritz Lang.  You owe it to yourself to see this film, and recognize just how much it affected the depiction of Science Fiction subjects in the decades to come.

Then, when the book is released, you should get a copy--because the illustrations are only the tip of the iceberg with this project.  The stories are all exciting and thought-provoking.  This is, by far, the best strictly illustration project I have been involved with in my 40 year career.  You're going to want a copy of this book.
Comments (0) loading...
Like(0)
Dislike(0)

James E. Lyle Sequential Illustrator
Public post
My apologies for not having posted anything in weeks!  I've been busy with several projects (currently under NDA agreements) that have taken most of my time.  However, I am currently gearing up to begin a couple of classes at the local community college.  So here's the flier for that!  (It's something…)
Comments (0) loading...
Like(0)
Dislike(0)

James E. Lyle Sequential Illustrator
Public post
So, I just had this idea in very rough form last week before leaving for what turned out to be a very disappointing convention appearance.  My intention was to possibly ink the piece while at my table, but so much time was eaten up just trying to hustle up some business that I didn't get to it.  However, yesterday I needed something to break up some of the monotony of another project.  So I inked on this a bit here and there, then took it home for my wife, Karin, to fill in the black areas on.  This morning I scanned it, did a few minor adjustments on it, and added the red in photoshop.  If I'd drawn this 30 years ago there would have been lines of fans asking me why I wasn't drawing DareDevil for Marvel.  Now such an image is as likely to get me snubbed by "woke" fans for "cultural appropriation".  As we said back in the 80s "whatever".

BTW the Kanji says "Samurai" but it's the version that means "Warrior Family".  I'm pretty happy that I was able to figure that out.
SamuraiIllustrationGraphicsSword
Comments (0) loading...
Like(0)
Dislike(0)

James E. Lyle Sequential Illustrator
Public post
So, for fun, created this Maxfield Parrish homage (pastiche, whatever you like to call it) using only digital tools.  Artwork copyright James E. Lyle.  Likely will have this for sale as a print, since it turned out so nicely.
Comments (0) loading...
Like(0)
Dislike(0)

James E. Lyle Sequential Illustrator
Public post
It's been a busy time since my last post, and I apologize for the delays.  Been hard at work penciling a new comic, "Nicaragua", as well as creating more illustrations for "Towers of Metropolis Volume 2".  Today I'm testing display for the upcoming X-Con in Myrtle Beach, SC, May 21-22 (I like to be packed and ready to go to shows at least a week ahead).  Hoping and praying that this display will bring more traffic to my table and result in more prints sold.  (I'll let you know if it has significant impact).
Comments (0) loading...
Like(0)
Dislike(0)
View previous posts (6/13)
See something you like? Subscribe to see even more!
Subscribe Now
The subscription gives you:

0.0%
collected
to reach
Prints seem to dominate my at-show sales. But some prints sell better than others. I'd like to streamline this process by involving you. So here's the deal: You invest $5 a month in a subscription, and you'll get first view of a number of potential prints (a minimum of 3 new potential releases per month). Based on your responses to these potential prints, I'll actually publish the top choice and you (as a subscriber) will have the chance to purchase the chosen print at a very discounted price--that is, $12 per print, signed and mailed, postage-paid directly from my studio. (Normally my prints go for $20 at shows, or on my website). If there's no clear consensus in a particular month, I may opt to release several prints, all with the same "first purchase option" for you, as subscriber.