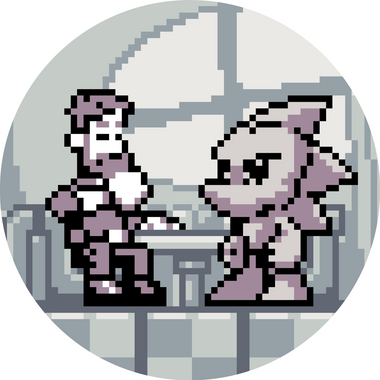 Hollywood Wants to Warp Your Kids

The media is a monolith with the same message: Fathers are weak. Don't listen to your parents. Your religion is dumb. Your race is inferior and evil.

I cracked open a modern version of the three little pigs to read to my own child. They were multi-racial pigs, the white male pig was the stupid one, and they were children of a single mother. None of this stuff needs to be in the Three Pigs. It's about pigs and dilligence! You can be 100% politically and religiously neutral and still do an excellent job telling the story!

Well, I decided to do something about it. I've been making kids' books, and they are just fun.

And now I've started a daily webcomic to prototype stories at bunny-trail.com.

But I'm just getting started. I'm going to start a video channel that has bedtime stories for your kids. I'm going to release video games created with flyover country values, not Silicon Valley values. And you can make it happen, right here.

For those who don;t have much, but want to support Bunny Trail Junction. Any amount helps it happen.

At this level, you get access to the pdfs of the monthlies/bimonthlies, allowing you to see the comic before it comes out, as well as DRM-free copies of all of the games.

Help me design a character that gets added to the stories. Get high-quality images of your character to do with as you please. Be in Bunny Trail Junction.


It's a Bible Story book. The first draft is already on the website for anyone, the crowdfund is here: https://www.kickstarter.com/projects/logicmonkey/awesome-moments-1-the-kings-of-earth/

The plan is to keep pushing the Kickstarter each day, while maintaining Bunny Trail Junction AND making the game that will come out in November. That's a lot to put on my plate.

If the Kickstarter funds, that will become the priority project starting in November. If not, I will probably double down on getting the videos made.
Comments (0) loading...
Like(0)
Dislike(0)

Bunny Trail Junction
Public post
Hi everyone. Since I had no subscribers on my old Subscribestar, and decided to unify my branding across several sites, and do a marketing push in the next couple of months, it seemed worthwhile to start over just to have a meaningful url/slug.

I will re-upload the comics and files for the Subscribers as soon as SubscribeStar is convinced I'm legit. For now, two-and-a-half months of comics, plus links to my books and games are all still available on bunny-trail.com

0.0%
collected
to reach
The threshold where I can work full time on my Bunny Trails. This makes giving the media away so much easier.

Hazzas Home Kitchen
G'day! It's Hazza from Hazza's Home Kitchen. I'm guessing you're here because you absolutely love all of my fantastic recipes from my YouTube channel.