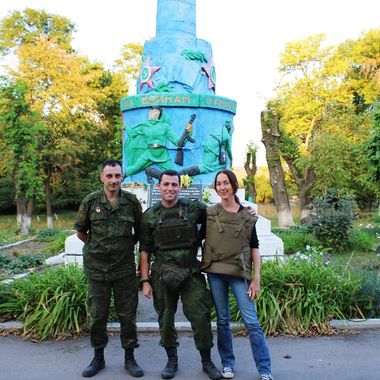 Reality Theories, EvaK Bartlett
By proceeding, you confirm that you are
at least 18 years of age.
Yes, I choose to proceed
Cancel
Cancel

18+
Reality Theories, EvaK Bartlett
You may know me for my journalism from Syria, but I've lived in and reported from many more countries, including Palestine (3 years in Gaza), Venezuela, Donbass, and currently Russia.This year will see me travelling less, writing more.
Subscribe
Send Message

Thank you for supporting my journalism!

I'm very grateful to my supporters, support which has enabled me to report from numerous countries/regions over the years.

I began in occupied Palestine, in 2007, with no support and only the determination to see with my own eyes how Palestinians are oppressed. Going to and spending 8 months in the West Bank of occupied Palestine (https://opt2007.wordpress.com/category/my-entries-from-occupied-palestine-apr-dec-2007/ ) and inevitably living in Gaza for several years (https://ingaza.wordpress.com/interviews-and-talks-on-palestine/interviews/ ) was the beginning of my political awakening.

De-arresting a Bil'in villager, pursued by Israel in its attempt to quash popular resistance. On this occasion, I had a pile of people on top of me, was kicked in the head by an Israeli soldier, and had tear gas chucked at the pile of us. VIDEO: https://youtu.be/2yD7GVNo_Vk?t=201 https://opt2007.wordpress.com/2007/08/13/reflections-on-accountability/

Most of you are here because you're aware the independent journalism doesn't pay. To the contrary, we put more into actually going to the place than we could ever make from one, two, ten articles.

Because of my supporters, I've been able to go to contested places like Douma, Syria, and share the Syrian side of the story:

Although I from the beginning supported Syria's sovereign right to fight terrorism and restore peace to the country, because I was living in Gaza until March 2013, I wasn't able to go to Syria until after that, April 2014.

Since then, I have been 13 more times, including extended stays, and visiting most of the key places war propagandists outside of Syria have written about.

Taking the position I have has gotten me a lot of flack, smears, accusations, as I'm sure most here will be aware of.

But I did, we do, because standing with Syria against vulture media and the NATO-Israeli-Gulf-Turkish alliance is the right thing to do.

For those who wish to... 
(Donbass civilians get no warning before being torn to pieces by Ukraine's shelling).

Who killed the POWs at Yelenovka? All signs on the ground point to a Ukrainian attack

"It was extremely difficult to witness the charred and twisted remains of Ukrainian POWs in the Yelenovka detention center at first hand. The stench of death was overwhelming. Bodies remained in the ruins and melted into the metal bunk beds they were on at the time of the bombing.

Other corpses, presumably killed by shrapnel instead of burning to death, lay outside. A soldier was inspecting them, presumably in order to determine the exact cause, and the victims’ identities. Even if the Ukrainian side killed its own soldiers, it was the Russians who took care to identify the remains.

I shared some of the gruesome photos and my thoughts on Twitter immediately after getting back from Yelenovka.

The next morning, I went around Donetsk to document the extremely dangerous “petal” mines Ukraine has dropped on the city. According to DPR Emergency Services, eight civilians had been killed by these mines just the day before. If you step on one of these tiny-but powerful-explosives, chances it will merely tear off a leg instead of outright killing you. And they are insidiously toy-like in appearance, likely to attract children’s attention.

Who benefits from the war crime at Yelenovka?

Ukraine and Western media, as would be expected, blame Russia for the bombing of Yelenovka detention center, which killed 53 people. Russia and the Donetsk People’s Republic (DPR), in turn, point the finger at Kiev.

In addition to those killed, the 2am bombing, which DPR officials say was carried out using American-supplied HIMARS, injured at least eight employees and over 70 POWs held there. The prisoners were captured Ukrainian combatants, mainly members of the Azov neo-Nazi militia who’d surrendered in Mariupol in May.

If HIMARS, or High-Mobility Artillery Rocket System, were indeed the source of the destruction and death, then it is almost certain it was Ukraine who bombed the prison, given that Kiev had the coordinates and is the only side in the conflict that possesses such weapons. Even the Pentagon admits it is possible, albeit characterizing the strike as “unintentional.”

From a logical perspective, Russia had no motivation to bomb the prison. For Ukraine, on the other hand, these POWs represented a liability, in that they could testify to the alleged war crimes they committed against Donbass civilians.

Ukraine has made a litany of claims meant to incriminate Russia throughout the current conflict –the Bucha massacre, the strike on the Mariupol maternity hospital, the Ghost of Kiev hoax, the supposed mass graves of civilians, the outlandish false allegations of Russian soldiers committing sexual crimes, which even saw the former Ukrainian Parliamentary Commissioner for Human Rights fired by Kiev’s own parliament.

Russia has invited the UN and the International Red Cross to investigate the Yelenovka prison bombing. Meanwhile, observers online have used the publicly available data to put together a picture of what occurred. Here’s an insightful analysis from the Rybar Telegram channel (with more than 627,000 followers), specializing in military analytics:

“The eastern part of the building suffered the most damage, where a powerful fire and explosion occurred, which blew out the windows.” Judging by the angle of impact, the analyst concludes that “the shooting was carried out from the trajectory of Marinka-Kurakhovo –the Sergeevka triangle– Pokrovsk-Udachnoe.” This is Ukrainian-controlled territory. The analysis could not conclude whether HIMARS was used, from the information at hand.

Along the ‘who benefits?’ line of thinking, a number of circumstances also point to Kiev. These have also been pointed out by Russian observers and compiled into a chronology. The captured Azov Nazis were taken to the Yelenovka detention center in late May. While prisoner exchanges between Ukraine and Russia have included Azov fighters, there is a strong opposition to handing them back over to Kiev, meaning that there’s no guarantee that they would be exchanged in the future – potentially making them a liability to Kiev. By June 20 reports of Ukraine shelling the prison already appeared on Russian channels watching the conflict. On July 28 the confession of an Azov member emerged, claiming that neo-Nazis in Kharkov and Kiev had direct orders from Zelensky’s office to torture and murder Russian prisoners of war. Late that night/early next morning, Ukraine struck the very detention center holding the Azov member who confessed, as well as others who might have done so.

Elsewhere, other neo-Nazis in captivity have confessed to deliberately murdering civilians, a PR disaster for Ukraine, made worse were the prisoners in Yelenovka to follow suit.

Last but not least, just two days before the Yelenovka strike, the US Senate passed a resolution urging the State Department to recognize Russia as a “sponsor of terrorism.” By perpetrating an attack and blaming it on Moscow, Kiev could be aiming to push that decision through – even though the State Department is reportedly reluctant.

Given Ukraine’s multiple attempts to incriminate Russia, and eight years of bombing Donbass civilians, killing their own soldiers is not too far-fetched. In fact, surrendered Ukrainian soldiers have claimed their commanders threatened to shoot them if they attempted desertion, and indeed Ukrainian nationalists firing on them when they attempted to surrender, in one case killing or wounding dozens .

It is left to Russian and DPR doctors to preserve the lives of Ukrainian POWs – even those apparently injured by friendly fire. Outside a Donetsk hospital after the Yelenovka bombing, one of the doctors working on wounded Ukrainians said that five had already had successful surgery for their shrapnel wounds, and two more were to undergo operations.

“It doesn’t matter which side you’re on, we will help you,” he said.

The ghastly scenes of charred flesh and shrapnel-studded bodies I saw at the prison will remain etched in my mind for a long time. Yes, war is ugly, but Ukraine is upping the ante when it comes to both war crimes and hypocrisy."