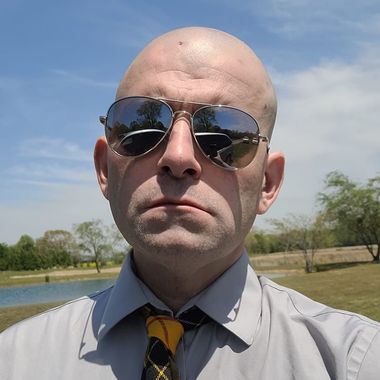 Same as basic, but early releases of podcasts and other stuff.

basically all of the above, but we'll probably do a video call every month, and you can also ask me (via email) advice directly about writing, small business, and other stuff and will get a response... (of course that response might indeed be "wow I can't help you.")

same as above, but with bragging rights. I might even agree to proofread for you but it'd better be interesting and I'm probably not your editor.

ianmcleod
Public post
First post. I'm Ian McLeod, author of THE DARWINVERSE series of pop-satires as well as three books of poetry (so far) that...funny enough...outsell my satire. Who'd have thought? All of that is available on Amazon.

I also keep a website at ianmcleod.com. Blog, some short stories, some poetry, etc. available there. And you can order some signed books and awesome shirts--which are usually printed with mine own hand--from my shop there.

If you're reading this you're likely familiar with me from somewhere like that anyway.

Right now my primary projects are the VIGNETTES sci-fi serial (first episode here), available free for everyone on my blog. When it's finished I'll be compiling it with some other SF stories and putting it on Amazon and removing it from my blog. Those other sci-fi stories? Well...they'll be available for Subscribestar members before publication, and I'll be offering special coupon codes for the eventual Amazon publication (and my other books) for members. There is no timeframe for this, but basically my strategy is: the more I get paid to write and create, the less time I have to spend not writing and creating. I do have a business to run and clients and customers to take care of, and that takes top priority, but I also do gig-work to fill in the gaps, but that's been difficult the past month as my vehicle decided it no longer loved me and needs about two grand in repairs. I miss the pre-Cash-For-Clunkers era when I could just find something for $500 on CL and I knew I'd get by for at least 6 months. Now good luck finding that for under $5k.

I'm also finishing the two final installments of the DARWINVERSE series. One is a novella, then a final novel. It's kind of nuts. It was already supposed to be over, but Popular Demand and all that. Everyone wanted more, so I erroneously thought That Was A Good Idea At The Time and started not one but two new books in the series. I also plan to post some (mostly) exclusive DARWINVERSE short stories here. Probably similarly to what I plan to do with VIGNETTES.

I like gig-work, don't get me wrong, but I'd rather be doing this than that. And if you don't know me, being in a coma and almost-dying in 2019 has left me with chronic health problems (MERE MONTHS before the pandemic. Totally unrelated. I blew up my pancreas.) As much as I love work and some days really wish I could jump back into a 9-5 job just so I didn't have to rely on day-to-day unpredictability of income, my health completely precludes that ever being a possibility again.

Podcast front? Mostly free, but I might do some open-chat/guest-centric stuff down the road. I know some interesting people. My planned studio space got eaten by my business in a good way, so I've had to redo all of my plans, but hey, video will be a better option with my new plan.

I'm also working on a game, but this is a backburner project. It's a series of game rules, and potentially related products, but my goal is to have a wargame that is pretty darn great. It's been in development for almost 30 years at this point as the fundamental core of it, my brothers and I invented as kids, and is so simple and stupid that it's a miracle nobody else has done it yet (although one guy came close, not exactly what I had in mind. And I was first.)

Malik Torihane
I am the tentacled Mangaka VTuber! I create manga (both original and fan), I am the author of "DB New Age", "Blood Rider", and "My Big Sisters Are Monsters!!", and other anime/manga styled art, most typically in the style of Akira Toriyama..