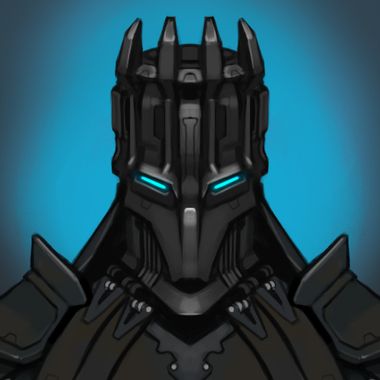 Greetings and power to you my future fans!

Many know me through my written words as the Black Knight. No, not that Batman guy, though we might think alike and share a lot, he is far too famous and rich. At least for now, he is. I am an indie author who writes science fiction and have recently self-published my first book titled Starshatter. It is a classic space opera, set in an alternative history universe heavily inspired by 80's fiction. The good ol' days, when we dreamt of becoming astronauts while devouring countless hours of sci-fi animated shows, movies and comics. Ah, the feels! No worries my fellow nostalgia warriors for I have you covered. My primary goal by setting up this page is to allow those of you who exhibit a desire to aid my work. Everybody knows that indie authors, be it game developers, artists, and writers are not rolling in cash. As much as we want to, swimming in pools filled with gold is kind of unrealistic. Not to mention one could suffer serious injuries. We love to create for you guys because we are in love with the act of creation. Our utmost devotion to each page, drawing, or the game we've spent years developing is validated by you our patrons. For me to be able to freely devote all of my time to writing my books alone, as most indie content creators know, as all of you know - one needs to cover at least the basic monthly necessities. That is what the purpose of me creating this account primarily is. I am working feverishly to self-publish my third book before the end of this year. Worry not, I do have a Master Plan. Conceived in utmost secrecy, the Plan took me ten years worth of mind-warping effort to fulfill. By pledging your generous support to me I will be able to finish all ten books of my space opera saga!

You can follow me on social media for regular updates: minds.com/Aragmar gab.ai/Aragmar RECENT POSTS

Those who passed the trials and joined my squadron!

The elite Patrons who want to support my work!

Of Organized Crime and Potatoes

Of Doom and Chuckling Hamsters

Of Seedy Bars and Terrans


Morison's cargo ship was destroyed today.
His loyal crew burned down together with it. They fought to the last, refusing to surrender, shredded by frigate cannons in Sirius's Prime lower orbit. He was now stranded here; a weapons trader without the means to procure merchandise and with a pocket full of credits that he couldn't use. Those damned pirate clans! The bastards, he suspected were getting plenty of help from the Taz'aran Empire and now, after the destruction of his starship, Morison was sure of it! The holes-for-ears were selling supplies to the clanners in bulk. Moreover, they deployed their own troops on the planet and had secured large parts of it for themselves. Their "Imperial army" not only guarded the backs of the Clanners, but they also fought side by side with them!
This whole invasion was made possible thanks to their supply chain and starship patrols, who turned the job of people like him into a living nightmare. Punching through a blockade like that wasn't something he was unaccustomed to, yet each time it became harder, till this day, when his boys and girls were lost. As a Terran, Morison cared much for his friends and family, as sometimes the border between those was non-existent. And again as a human, he had the duty to make sure all of his race's uplifted clients were safe and free from oppression. He was a merchant of Life; Morison's job was to provide quality merchandise for a low price - as low as he could manage after his "traveling" expenses. He was a trader specializing in all types of small arms, armored vehicles, light or medium tanks, APC's, and even mobile railgun artillery units. His entire shipment lost, destroyed together with his starship and crew. With a sad sigh, Morison walked away from the improvised, marked with flares landing zone and back to his colonist friends, to whom he gave their money back. After all, without delivering them the promised merchandise, he couldn't demand payment. He was not some filthy alien scumbag, who'd prey upon the unfortunate, pilfering their hard earned credits.
"I am sorry Morison... we... we didn't know the taz'arans had deployed another patrol frigate in the sector. If we did..."

Morison walked into his tank garage and flipped the lights switch. It was a big, spacey place and he had a couple of machines left over for sale still. Ever since that dreadful battle on Sirius prime last year, people had been coming here to buy some machines from his ever-shrinking inventory. Behind him walked in the tank reviewer - a strange bird, who looked around and immediately locked his eyes on Morison's prized possession. One of his older machines, and although he had to agree that it did the job it was designed to, the tank wasn't perfect by any stretch of the imagination.
The reviewer walked around the machine and waved his scanner at it, each time grunting with apparent dissatisfaction. Took Morison a couple of seconds but he quickly understood that the man didn't like what he saw. He had plenty of other vehicles in his garage and most were beautiful factory builds. So he was a little startled when the tank reviewer walked over to him and began complaining:
"See, Morison, I wanted to like this tank, I really did! But it was designed by someone who lacks sufficient skill and knowledge. Look at the rough edges of that armor plating, even the turret is crooked! Seriously, how can one even begin thinking of building such a dreadful thing?" - the man poked at his hand scanner and then pointed at the tank's interior:
"There is no structure here, every internal system placement looks rushed and the crew would be troubled by this during battle. Not the proper way to place the inner armor layers too. Again, here and here we have more crooked edges, and the main gun assembly is out of alignment by 0.0002 microns!" - he inhaled and annoyed shuffled away from the tank.
"Had the engineer taken his time to polish his creation and fix all those errors, that machine might've been of a good enough quality! But as it is, no."
Morison nodded and smiled at him, his left eye twitching for a second, as he was listening to him complaining about something that he didn't understand completely. He guided him to the back end of his garage and tapped the brand spanking new armor of a factory made Tank. The supply ship had dropped off this batch a week before and they were selling like hot cakes. Made on one of the bigger and heavily industrialized colonies, the "Halberd Mk3" followed an old and established design, put together by a whole team of experienced engineers. They could count on the aid of a VI software and a huge robotic factory to fix any imperfections in the overall design, he smiled and walked around this one nodding in agreement:
"Excellent! That is what I want to buy Morison! Why the hell are you even wasting your garage's space by keeping this old scrapheap over there?"
Morison's eye twitched again as he could no longer keep his mouth shut:
"Because it is my fucking garage, that's why! And, yes, from your perspective you are absolutely correct, that tank over there is far from perfect. It is rough around the edges, its armor is not layered properly, the turret, as you mentioned, is crooked, and the main gun assembly is off by full '0.0002 microns'!" - Morison waved his hands in the air in apparent outrage.
"But the colonists who had it loved it to bits. The one who built it, not that you even thought about it, was a self-taught engineer. This vehicle was the first that he built, alone, sick as a dog and on a tight deadline. He didn't have a shiny robotic factory to fashion perfect parts, but his two hands and only the basic of tools. There was nobody there to tell him the "perfect" way how to build things, he had to think on his feet. I want you to sit on a chair, glue your feet on it, and with your right hand tied behind your back, while vomiting your guts, build me a tank like this one!" - and Morison pointed at the shiny factory made "Halberd Mk3".
"What?! Are you crazy Morison! I am not an engineer, to begin with, and..." - the man suddenly turned around and looked at the decrepit tank once more - "Wait just a goddamn minute Morison! You are pulling my leg here. You want me to believe that people went to war in it? Really?! This is madness!"
"No, not madness, but a hero of the Sirius defense war. This machine is called 'Defiance' and destroyed more than twenty enemy tanks in one battle alone. Yes, many brave colonists had died in it, but they pulled the tank after each battle, fixed it, and continued fighting. Its main gun is off, but they knew about it and corrected their aim. The fucking armor plating is not layered with perfect precision so they always positioned the tank to compensate for this. It was everything that they had, and their families survived because of it. Once after the main turret was blown off, they used it as an ambulance and evacuated hundreds from the battlefield. This ugly, imperfect tank saved thousands of people! You are absolutely right when noting all of its shortcomings, the rushed construction and...everything."
Morison pointed at the "Halberd" with a crooked smile of his own:
"That shiny new tank, fresh off the assembly line is exactly what you need. In fact, it is the only thing you can ever be satisfied with. You are a man who values perfection above all - Take it or leave it!"
The stunned client waived his cred chit over Morison's PDA and left, buying his last three "Halberds" and he, before closing down for the day checked the 'Defiance'. He jumped inside and immediately all systems turned on, as the voice of the now long-dead engineer spoke calmly, but enthusiastically form the main computer:
"All systems on, I am ready to fight!"

If you liked that short story, check my books:
Starshatter , Twin Suns Of Carrola , Treads Of Vengeance , Von Braun's Gambit , Secrets Of Lothoria , and Final Liberation

$200.0
THE GOAL
REACHED!
My goal is to use these funds for book cover art and commission more character art. That and hopefully buy some food, us indie authors are not rolling in bales of cash you know.