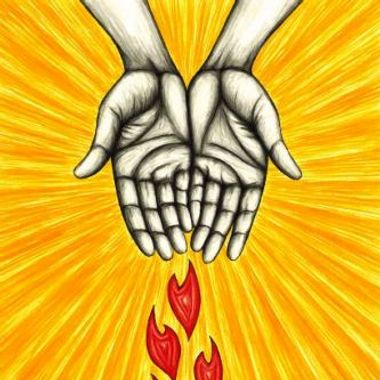 Symbolic Frequencies
I am a writer, mystic, and intuitive guide in the esoteric and metaphysical arts. I try not to take myself too seriously though.
Subscribe
Send Message

War on the horizon...Private vs. Public power struggles and inner restlessness and wrestling for our true identity...arguments, fighting, opposition, conflict.

The Sun ingressed into Cancer on June 21st.
Neptune went retrograde just a day before.
We now have Jupiter, Saturn, Neptune, Pluto rx with Mercury joining the quadfecta on July 7th.

Mercury is ending its opposition to Pluto, but still technically in waning opposition. Mental, inner questions about identity and personal power (how do we communicate more effectively, non-violently and with forgiveness and understanding?), with outward, open warfare as Mars continues to oppose Saturn and Pluto in Capricorn.

The Moon in Aries is beginning its square to Saturn and will be squaring Pluto in the next couple of days.

Venus is opposite Jupiter. Jupiter is still squaring Neptune hard, making us wonder what we really believe and if all this is just some delusional fantasy...?

SILVER LINING: Thankfully, we'll get a trine to Jupiter and a sextile to Venus from the Moon; Saturn is still almost directly sextiling Neptune, while the Sun sextiles Uranus for the next 8 or 9 days, encouraging us to pursue our independence and freedom in a world that seems to want to restrict our egos, will, creativity, and outward expression.

Is it all just a choice?

June 21st, 2019...mankind stands on a precipice. Civil unrest, poverty, war, corporate and banking power structures, the power elite, tech tyranny dystopia on the horizon... and all we want to do is enjoy hearth and home with our friends, family, loved ones and neighbors ...

The Sun ☀️ has ingressed into Cancer, sextiling Uranus in Taurus ♅ and squaring Chiron in Aries ⚷
Venus ♀️ is half way through Gemini, squaring Neptune ♆ and opposing Jupiter ♃
The Moon 🌙 is in Aquarius, sextiling Jupiter ♃
Mars ♂️, Mercury ☿️ and the NN ☊ in Cancer are still opposing Saturn ♄, Pluto ♇, and the SN ☋ in Capricorn, bickering and odds with each other but trying to come up with a solution that works for everybody...and probably failing miserably.

Symbolic Frequencies
Public post
*//INCOMING TRANSMISSION FROM ZUBENELGENUBI//*
Mars and Mercury join the North Node in Cancer on June 15th, 2019. With recent news of the ongoing battle of Big Tech and their partners in the Legacy Media vs. New Media in the spotlight, the Mercurial sentiment around communications and media broadcasting seeks withdrawal, protection and comfort in the emotional depths of Cancer.

Although it is looking to protect itself from the dominant overreach of the MSM and Big Tech, Mercury still wants to express itself. It’s meeting with Mars gives the winged-god a sharp-tongued, fiery communication style, where overreactions and provocations and emotional outbursts in the form of tongue-lashings or even verbal abuse could become the norm over the next few days to a week.
The fact that both Mercury and Mars are joining up with the North Node shows that pressing global issues around Big Tech censorship, MSM media malcontents, the proposed digital Bill of Rights and the FTC looking into possible antitrust violations, will compel independent dissenters and free speech advocates from every political stripe to seek a new home among other platforms for disseminating their views.
Cancer is associated with the Fourth House and is ruled by the Moon. Cancer is a feminine, receptive energy, all about retreat, safety, withdrawal, empathy, nurturance, and expressing subtle emotion.
Thus is it no surprise that dissenters and political opponents of the power elite would want to find new platforms to congregate and feel a sense of belonging, of tribe, community, family, home and hearth in the digital landscape? If you’re no longer welcome in someone else’s home, it’s time to pack your bags and find a new dwelling.
Opposing Pluto and Saturn and the subsequent power structures represented by the sign of Capricorn (Multinational corporations and conglomerates; Powerful religious institutions like The Vatican; Higher education and academia; Central Banks and the global financiers who run them; and various states and governments all over the world) gives credence to the old adage, “tell truth to power, even when your voice shakes.”

There is a watery depth of The Word, the Mercurial Logos erupting from what were once still waters, spurred by the fiery onslaught of Mars preparing for battle, on the world stage. Yet, this speech (call it free, call it hate, call it nothing, but who gets to decide?) simultaneously wants protection within the Cancerian shell.

Mars doesn’t do well in Cancer, so he’s naturally crabby and irritable here. Expect to see heated verbal exchanges and maybe even verbal abuse throughout the next week, as Mercury and Mars slowly part ways, and Mars begins it’s uncoupling from the North Node.
Communication, speech, the rational and rational mind and media, however we express it as individuals and as a collective, is having its dance with destiny right now with the North Node.
The urge to go to war, the sheer masculine instinctual drive and cutting, severing aspects of Mars could be Big Tech and the power elite’s own ambition to silence the digital free speech movement underground into the watery depths of introspection, where the movement’s need for monetary safety and security might trump resistance against these larger, tyrannical forces (considering these aspects are opposing Saturn and Pluto in Capricorn).
The common man, the forgotten people of the world, must find their voice from a place of compassion and nurturance, but be prepared to fight for the safety, dignity, and the rights of all, like a mother bear protecting her cubs.

$444
to reach
the Goal
My goal is to hit $444 from subscribers. Once this goal has been reached, a special written report on Chiron will be sent exclusively to SubscribeStar subscribers.