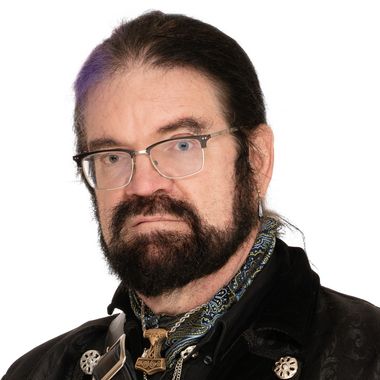 Goth on Ice
Goth on Ice: My trials and foibles as I attempt to learn figure skating and begin entering competitions.
Subscribe
Send Message

The second in my "tips for older skaters" videos. I put the first up on YouTube. This one will be...

Goth on Ice
Public post
I dabbled a bit, a little bit, in ice skating when I was 18.  Didn't even really learn the basics then.  I could do simple forward skating, something sort of like a forward crossover, and T-stops.  That was it.  When I was in England (overseas tour in the USAF) I would occasionally go down to London to skate at Queens Ice Club.  Again, that was it.  After returning from England, I never really had an opportunity to skate for many years.

When my daughter expressed an interest in skating, I decided to take her a couple of times and see if she was serious before getting her signed up for actual lessons.  I found out that it wasn't like riding a bike.  As little as I had originally achieved I had lost all of it in the intervening years and was starting again from the very beginning.  And since I didn't bounce like I did when I was 18--falls hurt a lot more, it's easier to get injured, and injuries take longer to heal--it was actually harder to re-learn than it had been to learn in the first place.

So my daughter and I ended up taking lessons together.

I started my Goth on Ice posts over on Youtube ( https://www.youtube.com/channel/UC19DNNO-2-2A_7_KQ2lrQ6A ) to record my progress and illustrate my difficulties as an older skater partly in hopes that it might be of use to other people who might like to try.

As I write this I am nearing the end of the standard "adult" basic skills progression and preparing to move forward into actual figure skating.  There are competitions available for older skaters which I hope to pursue.

Brad Getz Music
Hi I'm Brad Cologero Getz, I have a plethora of interests but my main hobby is music. I have been in a few bands and also have written a lot of solo tracks.
This website uses cookies to improve your experience while you navigate through this website. Continue to use this website as normal if you agree to the use of cookies. View our Privacy Policy for the details. By choosing "I Accept", you consent to our use of cookies.