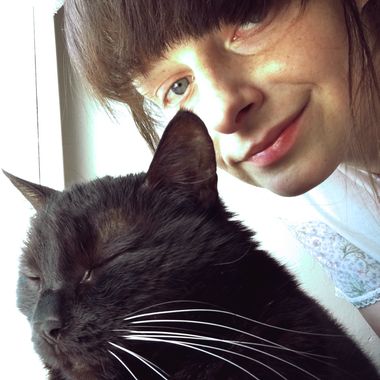 I finally had my phone ready to record him. Often, I found all the drawers opened when I got up in the morning. Or the hallway had a trail with my husband Raph's socks. I'm sure Hero just wants to help make things tidy, just that he's got other definitions of "tidy". https://youtu.be/lcMSZDAkcuY
CatsVideoPetsCatSilly
Comments (0) loading...
Like(0)

Our beloved Sonic passed away

He was one strong boy, never gave up and kept hanging on to life until his very last breath. He was not alone, not even for a second. It was obvious that something was not right and that he was close to passing away. I carried him around with me if I had to go into another room, because I didn’t want to leave him for even a minute. When it was time to go to bed, I took Sonic with me and laid him into our bed, where he had slept all those years. But I didn’t put him into his basket that was on our bed, and instead right by my side, with hot water bottles, a his little pillow for his head and covered him with a blanket.

I kept the bedside light on, so he could see me and know where he was. All 3, Samantha, Hero and Lisa kept checking on Sonic, sniffing all over his body and licking his head. Again and again. They knew something was wrong. I kept holding his paw, stroking his head, just like he had always loved. That way I stayed with him until he stopped breathing at about 2:10am.

Up until this last day, Sonic was still walking after me, and out onto the balcony, enjoying the lovely warm afternoon sun. He loved lying in his big basket in the living room, while watching the pigeons fly back and forth in front of the window.


He was always with one or all of us. Sonic was either following me, wandering around a bit, or staying with Ralph in the living room when I was out of the house, or I took him into the bedroom with me when I went to bed. Samantha, Hero and Lisa were also always close by somewhere.

During the day, Sonic was in this basket (the one in the pic below), which I made as soft as a cloud, with a soft pillow for humans underneath him and another cushion at the back, so that it was soft all around him. In addition, I put hot water bottles in this basket, just body warm, but it kept him lovely warm and comfy. Ralph and the other kitties were usually all in the living room as well, hanging out like you can see in the pic above.

Lisa and Hero gave Sonic cuddles all the time. These three were friends right from the start. It was the sweetest thing.


As you can probably see in the previous 3 pics, I had made Sonic a little coat, because the fall started and he was thin. I just wanted him to be warm at all times. Sonic was one of those kitties who didn’t mind things like that at all. In fact he seemed to like it and feel comfy.

Sonic would eat on his own, but it was not enough, even though he was hungry. That’s why I had to feed him with the syringe. He loved being fed really. If I was too slow and waited too long for him to swallow, he would move his head towards the syringe, to let me know he was ready for another mouth full.

Sonic drank on his own, but I always gave him a little additional water to make sure he was hydrated properly. I would feed him every two hours, making sure that his stomach was never empty. Because he would get nauseous if his tummy was empty for longer than 3 hours. I would feed him right before I went to sleep. I also had some chicken breast with me in the bed, in that container. He would wake me up if he was hungry during the night and I would let him eat.

I would also feed him the pureed meat during the night with the syringe if he was hungry, or if I saw that it was time for a feeding, if he didn’t wake me. I usually fed him at midnight, then again around 2:30am and then again around 5:30am, go back to sleep and get up at 7:30 and feed him again and so on during the day.

Now I feel so sad that I don’t have to wake up to feed Sonic during the night anymore. I would have kept doing this for many more years and would have gotten up even more often if it would have been needed. There was literally nothing I would not have done to help him.

And I would do the same for all of my sweet kitties.

In the end, Sonic lived as long as he possibly could with his condition. His will to live had no limit. Even during his last moments I knew that he would rather stay with us. Though I’m sure that once his beautiful soul left his ailing body, he must have felt relief. He must have been so amazed to be able to hear, and to feel strong again and without the weakness of his body holding him back. I pray that he is in peace and with Murli and the others. I pray he isn’t frightened and confused at what happened and that he was helped to the light.

The rest of that night

I laid Sonic’s body into our kitty pram and put a blanket on him like always, just as if he was sleeping. I kept the pram by my bedside. There was no sleeping really. But the hours till the morning were just a blur. I got up at 7am and called the pet crematory, which I had also called for Murli, almost two years ago.

I’m glad they exist, as they are very kind and everything they do they do with the utmost respect and thought. The few hours until the man from the pet crematory arrived were a blur yet again. I just cried all the time. Before Sonic was due to be picked up, I gave him one last brush.

I also asked if Sonic could keep his little coat and thankfully he could, since it was just wool.

It was difficult to give away his body, just like it was with Murli.

In a few weeks, I’ll be able to pick up his urn. It always takes a few weeks, because his urn has to be ordered as they are handmade. It was the same with sweet Murli.

What was wrong with Sonic’s health

For a long time we didn’t really know what exactly was wrong with him physically. He started having issues with his digestion in 2018 and suddenly started having constipation problems. Though, with a change in diet, fibre and beneficial supplements, it was going well, aside from a few occasions where we went to the Vet if he had problems, which were thankfully resolved easily. Otherwise he was perfectly healthy.

Then in January 2021, his weight started dropping quickly and he was not eating enough by himself. So we went to the Vet with him a few times back then and found out that his digestive system was not working well enough and not absorbing enough nutrients and not metabolising everything properly.

He got enzymes I was to add to every meal, supplements and other good things for his digestion to help with it. Like I wrote above, I fed him a liquid diet with syringes, on top of what he ate by himself. The pureed meat was high in calories and nutrients, but easily digestible. That his meals were mostly liquid, helped his body digest the food better as well.

Doing all of this, he lived as long as possible. His body had reached a point, where his digestive system could not absorb enough anymore to stay alive. No matter how much food he would have gotten, or how nutritious it was, his body could not absorb any of it anymore.

I’m thankful for every moment and every day I had with Sonic. I always wish they could stay with us forever, or at least for much much longer. Each kitty is so unique and special, such a blessing on our lives. It’s so difficult to get used to Sonic not being here anymore. During the first couple of days, I still kept turning around from my desk, with the intention to check on Sonic, who would have been behind me in his basket. Or I woke up with the intention to feed Sonic.

For me, the days are still as if I’m in some absent minded blur most of the time. I keep just staring into nothing for quite a while, and often my mind just feels totally blank.

Though I’ve been showering Samantha, Hero and Lisa in even more cuddles than I had done anyway. I’m trying to distract myself with podcasts and I focus on Ralph and the kitties and making them happy.

I’m also wanting to get into posting again properly. I know it would help a lot to connect and keep up with all of you wonderful people.

There is so much I need to write about regarding the last months since spring and how things were. But that will all be in a separate, or even a couple separate posts.

Thank you for still visiting and reading my blog.

March 27, 2021 - Hero was interested in the lens cap hanging of my camera. So I started playing a bit, which is why the video is shaky. I was hoping it would not turn out too crazy, but it does kind of make my feel seasick lol. Sorry. But maybe some will like it anyway.

Lisa and the kitchen roll

March 26, 2021 - While I was feeding Sonic, Lisa took the kitchen roll for herself and had a good fight with it. She always wins!

Hero and Lisa have fun with Catnip mousies

A lovely friend from Germany makes these awesome catnip toys. They're the best! Hero and Lisa absolutely love them.

I’ll have a proper post up soon! Still really busy with Sonic and every day stuff. But it’s all good! Sonic is still improving and the other’s are purrfectly fine too.

Thank you for visiting us!