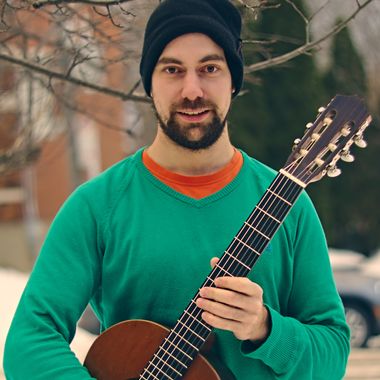 When I started to play solo gigs at open mics around town, I wanted to branch away from the classical repertoire and play something more modern. Up to then at open mics, I had appeared only as an accompanist to a violinist. So during our ten minutes on stage I would strum chords and sing along to traditional Quebecois dance tunes.

That all changed when I decided that I wanted to appear as a solo act and I set off looking for something to play other than classical repertoire. This was when I discovered the tune "City of Tokyo" by the Japanese fingerstyle guitarist Rynten Okazaki. Since he hasn't published much in English or toured outside of Asia, it was hard coming by more information about him or his works. Even harder was finding decent tabs so that I could learn the song.

So one of the first original fingerstyle tunes that you will find on my channel (both the cover and the tutorial) are for City of Tokyo by Rynten Okazaki. I really love the jazzy beat of this song, and I think it's a shame it's not played more often.  You can see that Sungha Jung covered it when he was a kid, back in his early days of being a child prodigy.

What do you think? Find the tabs attached to this post, and go check out my tutorial on Youtube. Happy learning!