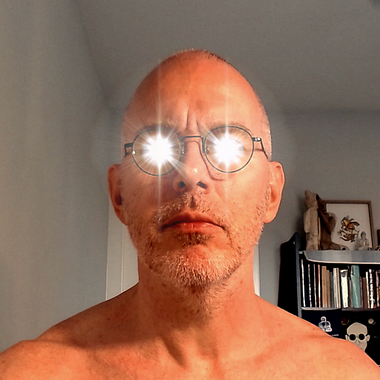 Politically Incorrect Dharma
Pannobhasa, a.k.a. David Reynolds, till recently P. Bhikkhu, formerly living in Burmese caves and at various places in the USA. For 30 years a Theravada Buddhist monk, and presently an author and teacher contributing some Dharmic philosophy to the plastic Babylon of the west. A Discord server has been set up for the group, and a link may be sent to you upon request. Be happy.
May 30, 2021 07:30 PM
Public post

The old Nippapanca Blog has just been de-activated (still not totally deleted but I think I'm the only one who can access it now), to facilitate turning it into probably at least 3 books. So I am requesting a little feedback. Let's say I make 3 books out of it; I suppose one should be straight Buddhist philosophy. Another can be more personal, with my own path involved more obviously, and presumably less insistence on orthodox Buddhist philosophy (more eclectic but still emphasizing spirituality and philosophy). So what would the third be: miscellaneous cultural reflections, which I hope would include some of my best writing, including my interpretation of Moby Dick and the Russian movie Stalker? That's pretty much the idea I have at present anyway. Feel free to chime in.

At present my main criteria for choosing essays is: 1) My own opinion concerning an essay's value and my liking of it, and 2) popularity based on numbers of views in the (still existent) stats pages. 3) would include specific requests, or else any volunteer editorial suggestions, which will be more difficult now if you can't access the old blog. So you'll probably have to trust my own judgement, unless there are any old essays/articles/posts that really stand out as something you liked. The precipice article I wrote has received some praise, so that one for example would be sure to be in the first or second volume mentioned above.

Follower №3a362e0b
What if the third book was a manifesto on your ideal model of westernized monasticism? Or fully synced Buddhist practice for a specifically western civilization?
17 days ago

Politically Incorrect Dharma
These first books will be mostly composed of essays from the old Nippapanca Blog, so freshly written stuff will probably have to wait till later, except for some editorial comments and maybe an extra essay or two. My earlier blog does have much to say about the weaknesses (and a few actual strengths) of western Buddhism though.
16 days ago

Follower №a12c67e7
I like the three categories you've come up with. I'd suggest a bibliography and a glossary for each book (especially for Buddhist philosophy/cultural essays). And perhaps footnotes/end notes explaining certain references the average reader might not be familiar with. And I think an additional new essay or two per book would be nice, especially for people who've read your blog in its entirety. Also, drop me a message anytime if you need help with book formats/font types/font sizes/spacing/pagination, i.e., the nitty-gritty of publishing.
17 days ago

Politically Incorrect Dharma
I may take you up on the offer of editing advice, as I'm going to have to learn this from scratch. The suggestion of a few original essays per volume is a good one I think. As it turns out, I probably have enough material here for six books, so long as I edit out only the worst 25% or so of old posts. So there may be more nuance in themes in the finished books. (One or two on technical Buddhist stuff, maybe one on eclectic religious philosophy, maybe one on personal experiences including travel, maybe one just on weird, mindscrew stuff, etc.) Though if I take you up on advice it may help to know you by some other name than N0.a12c67e7.
16 days ago

Follower №a12c67e7
Also, do include your essays on Traditionalism/Guenon/Evola!
17 days ago

Politically Incorrect Dharma
The Evola ones are on the NEW blog, although I do have a 2-part critique of Guenon on the old blog.
16 days ago

Follower №3a362e0b
Venerable Sir
Would you consider doing a video with Dr. Edward Dutton? I think you two would have interesting conversations!
https://www.bitchute.com/channel/thejollyheretic/
15 days ago
⌃ Load previous 1 replies

Follower №3a362e0b
He accepts plenty of guests from many different fields, there's no need to be shy, Venerable! He's an open friendly guy, just send an email :)
15 days ago

Follower №3a362e0b
Would you prefer me to prod him for you, Venerable Sir?
15 days ago

Politically Incorrect Dharma
Sure, yeah, prod him for me if you please.
14 days ago