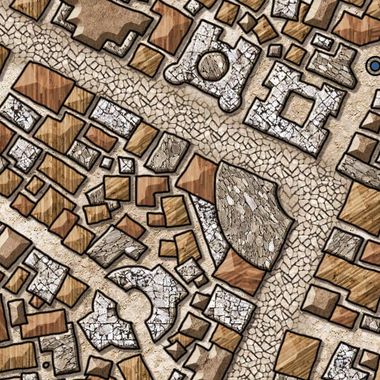 Palaethos: City Shard of the Shattered Worlds
Exploring the mega-city of a fantasy campaign one neighborhood at a time
February 22, 2019 22:46
Public post

A Brief Overview of the Races of the Shattered Worlds

There are five distinct sentient races currently thriving in the Many Worlds. All those races are represented in the population of Palaethos, so it will help to understand the character of the city by briefly reviewing each race.

Pretty much what you’d expect with all the diversity, adaptability, and innovation that comes with the species.

Physical Description: The Jhenni are evolved from an aquatic species and retain some vestigial physiology from those origins. While they speak and eat with their mouths, they breath via gill-like slits in their throat. Their skin bears faint iridescent patterns that are the echoes of scales. They possess four fingers (three primary digits and an opposable thumb) and move with grace and an economy of motion.

In general, the Jhenni physique is lean with an average height of 6’ or taller. Cultural Description: Jhenni society is defined by cultural organizations, be they familial, professional, or philosophical. While individual achievement and expression is celebrated, every individual is regarded in the context of their affiliations to these groups (and their achievements or failures are woven into the tapestry of those groups). Loners are distrusted because they have no cultural context for interaction.

There are several sub-races of Jhenni bearing subtle shifts in appearance and demeanor.

Physical Description: Everything about the Urgon physiology is tuned to survival. Their bodies are powerfully built with dense muscle mass and they possess redundant vital organs to sustain the body should the primary organ fail. Not only do they heal quickly, but their bodies grow defensive bone plating over any substantial wounds. Many Urgons cultivate these bone shards, growing “horns”, defensive plating, or bladed ridges, effectively weaponizing their bodies.

Cultural Description: Like their physiology, Urgon society is focused on survival, both of their species and their culture. Work and purpose are prized above all else. There is no “unemployment” in Urgon society and any individual finding themselves without a task will actively seek out productive work. That’s not to say there is no art or leisure (for both are essential to a thriving culture), but they are framed in the larger context of an individual’s contribution to the larger collective. Indolence and ambivalence are subversive qualities. There are several sub-races of Urgon bearing subtle shifts in appearance and demeanor.

Physical Description: The Chyn’tah are an insectoid race. They are bipedal with appendages – two primary arms and two secondary arms for fine manipulation and balance. Their bodies are covered in chitinous plates that serve as a natural armor with coloring and contour denoting hive affiliations. They are swift and precise in their movements.

Their physiology is extremely adaptive. Cosmetic shifts to blend in to an environment can be effected in moments, while more dramatic alternations to adapt to severe temperatures or toxic environments will take longer. In time, a Chyn’tah can adapt to survive in nearly any environment.

Chyn’tah language is very subtle, incorporating not only vocalizations and clicks, but also scent and physical nuances. As such, it cannot be effectively replicated by any other species. More often than not, conversations between the species will require both participants to understand the language of the other with both speaking in their native tongue.

Cultural Description: Chyn’tah culture is built upon the collective will of the species. A true “hive mind” awareness is facilitated through their meditative practices augmented by narcotics that allow for the individual to merge with the collective. In times of racial crisis (wars, plague, etc.), this merging can result in physical and emotional shifts in the entire species.

Notions of personal property and political boundaries are not natural to the Chyn’tah (which has led to frequent conflicts with other cultures), but they adapt quickly if it means the collective will thrive.

There are several castes in Chyn’tah culture defined by transformations in their long life cycle.

Physical Description: The Slaath are a bipedal reptilian species, with vestigial tails they use for balance and – if necessary – combat. Their fingers end in talons that some Slaath either sharpen or adorn with razor sharp steel sheaths. They have a neck hood of thick pliant flesh that surrounds head, neck and shoulders that is unfurled and extended in times of great emotion or as a display of power/dominance.

Cultural Description: The Slaath are the most mysterious and insular of the races inhabiting the many worlds. The only known Slaath city is on their home shard of Rhazishad. In all other places they are the racial minority, gathering in the cities and settlements of other races in clusters under a dominant Meta or leader. The notion of “family” is alien to them – only the Quedran (or “order”) holds any purpose or relevance to them, a combination of holy text and life philosophy that shapes and defines every aspect of their lives.

There are several sub-races of Slaath bearing subtle shifts in appearance and demeanor.