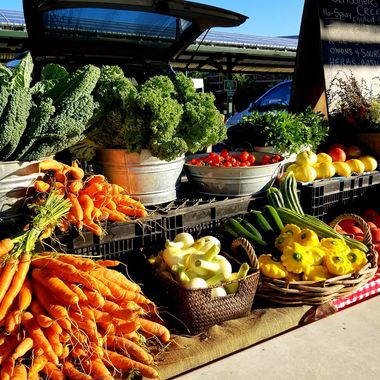 A Glimpse Into Our Spring CSA (Community Supported Agriculture)

Here are a few photos of the spring subscription baskets we provide to our CSA members. In addition to selling at the local farmers market since 2011, we have offered our CSA for about 7 years now. Community Supported Agriculture was influenced by Austrian philosopher, Rudolf Steiner. The system connects our customers directly to where their food is coming from as they pre-pay at the beginning of the season for a "share" of the harvest.

We have been told many times by many of our repeat customers that we have the  most beautiful, delicious and economical CSA shares they've ever seen/heard of. This quality is something that we take very seriously and it is what sets us apart from some other local CSA's.

In our first two years we only took on 5 CSA members. This was so that we could experiment with what worked and what didn't. We also have relied on the farmers market sales for the majority of our income. We didn't want to sacrifice quality or consistency for either the market or our CSA members. Over the years we have slowly grown, taking on a few new members each year. This year we are planning to start with 25 members in the spring but we may increase to 50 for the mid-season. Ultimately our future goal would be to serve 300 families. Some of the farms that have inspired us are Neversink Farm and Polyface Farm.

We are limited in our ability to produce the amounts necessary to sustain a CSA of that size until we can hire one or two part-time farm hands who could also deliver once a week to nearby towns. Additionally, infrastructure is needed. Things such as a walk-in cooler, a covered, permanent washing station/ stainless steel outdoor kitchen area, etc. would be helpful. Indeed, due to new laws that have passed in Indiana, small farmers will be required to implement such things.

As the situation in the United States continues in uncertainty, I foresee an increase in the demand for local food produced on small, family farms, and we are excited to grow!

Our "growing" season begins around the first of February as we are sowing seeds for Spring and Summer crops such as onions, radishes, lettuces, kale, chard, carrots, beets, flowers, and herbs.