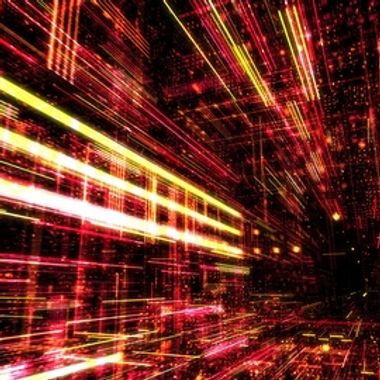 Hypermodernity
This is the official supporting page for "Hypermodernity:" a literary movement branded by a small but international circle of writers and artists who are addressing the radical transformations of our being-in-the-world since the Internet went public in 1995.
April 12, 2019 06:37 PM
Public post

This platform is maintained by poet and archetypal psychologist Michael Aaron Kamins whose groundbreaking poetry-cycle "Transderivational Searches in Absentia" (e.g., "Absences [Poetry];" "Clouds [Poetry/Hypermodernity"]) was instrumental to the foundation of what Kamins and friends have branded “hypermodernity:” a literary movement based on a visionary-critical theory concerning the status of “reality” since the Internet went public in 1995 (cf. John David Ebert [cultural-discourse.com]; and Ebert and Culkin "Hypermodernity and the End of the World" [Amazon.com] and Michael Aaron Kamins [Medium.com; Amazon.com])

As our ideas crystalize and the circle establishes itself, it is necessary to invite the support of subscribers who are interested not only in new content but in co-creating what promises to be a revolutionary approach to literature, thought, and theory for the new Millennium; an approach that in parallel with the vast changes of reality brought about by the Internet in 1995 is nothing less than a full-scale negotiation between the boundaries of the Real and the Imaginary.

It may be a meaningful coincidence that Hypermodernity as a literary venture coincides with the 100 year anniversary of the comparable "Surrealist movement" (Surrealist manifesto of 1924) established by a small group of Parisians in the second decade of the 20th century. Perhaps within the first decades of every new century a crew of friends and visionaries, poets and madmen are brought together to determine what is possible within the bounds of a given cultural horizon. The phenomenon and destiny of Surrealism is strong evidence that these inceptual-events always begin as transformations of language--e.g., poetry-- and, later, become institutionalized reality itself. For example: what were first rare literary novelties (e.g., poems and prose of Andre Breton, Louis Aragon, Paul Eluard, Robert Desnos, etc.) became the world-famous paintings of Dali, Max Ernst, Magritte, etc., and since TV, the 1960s, LSD, computer-games, and the Internet, Surrealism has super-saturated everything-- has indeed become the new reality.

We aim to make Hypermodernity an international literary phenomenon as it is precisely a movement dealing with the implications of telematic Globalization whereby the earth has been encased in a digital-aethyric sphere of electromagnetic signals that forms both a matrix for the radical actualization of the Imagination and a kind-of neuro-Gnostic prison for the psyche. Kamins calls this: "CGI-cubed" or C³GI:  the Capital Climactic Climatic Global Imaginary, i.e., the Hyper-Cloud-- the totalized global synchronization of cloud-computing and its extensions into the technical infrastructure of our social and civic spaces; as we advance into the new Millennium we will be increasingly living within the dreamspace of the Hyper (or: the Cloud)-- for example augmented realities and full-immersion VR-- introducing unprecedented intensities to the ontological and epistemological dilemmas that have always been with us-- but never in this way...It is the responsibility of the "Hypermoderns" to get a handle on this. But such handles have to be made.

We hope to organize events for Hypermodernity between Los Angeles, CA and the art/cultural district of Santa Fe, NM-- home of author John David Ebert. Your subscription will go to making such happenings possible and the generation of more content.

We are asking for your participation to help us afford continuing to independently produce and publish our own books and the new video series "Behind the Pages: On The life and works of John David Ebert w/ Michael Aaron Kamins"-- which goes through each one of John David Ebert's 30 books in order to learn more about the people, places, and ideas that inspired Ebert's brilliant literary contribution. With enough support this video series will expand into a regular podcast-- or multiple series-- allowing us to bring on featured guests.

Please subscribe; and help us launch a Vision: a new American and international literary, theoretical, and artistic endeavor that has the promise to address and solve the problems of "hypermodernism."